HEATING A CHURCH – Warming Up The Congregation

Heating a church is seemingly always a challenge. Whether it’s the structure’s physical attributes, the climate variations, the occupancy schedule and warmup demands, no two are alike nor can they be treated as such.

Oh, to turn back the clock a few centuries when most churches including the Great Cathedrals of Europe were unheated! Shivering through a lengthy sermon must have certainly tested the faithful. However, we have become sensitive to our comfort in modern times including group participation in religious activity. “Passing the plate” to pay the fuel (heating or cooling) bill is particularly noteworthy to the congregation and usually a topic of comment.

The scope of our discussion will be limited to and focus upon improved heating of a church (or similar structure) via enhanced air handling. In our experience most congregations have focused on cooling enhancement by adding ceiling cooling fans and employ them to more aggressively circulate air with or without air conditioning. Now revisit a church during the heating cycle ….. and the fans are still! Why?

Heated air warms people, and eventually the structure. Seat yourself on a cold pew bench or metal chair when it seems that the air around you is reasonably warm and you will get the message. Add the practice of doing temperature setbacks between occupancy to conserve fuel (customary in churches and meeting places) and you aggravate the warmup process. Some of this can be alleviated with the use of Programmable and WiFi Thermostats, but even these cannot address the underlying issues of efficient heated air distribution, our topic.

As simple and as obvious as it may seem, heated air rises! Any contained structure, heated or unheated, exhibits a higher temperature at its top vs. its base. Whether it’s a fully “vaulted” cathedral or an arctic igloo, the effect is measurable. No complaints from the choir loft in a cathedral, by the way! An extreme can be found in a high-bay warehouse where seasonal upper temperatures can reach above 140°F, an immediate personnel health endangerment. It must therefore become obvious that we must turn on the fan(s) to advantage the heating situation, but how and when?

Most structures employ perimeter heating, i.e. placement of heating radiation or air registers around the exterior walls and usually positioned under windows where feasible. Heating radiation and heated air registers induce “convection” or natural rising and circulation of heated air, diffusing it with cold air emanating from windows and exterior walls to minimize their cooling effects. This heated and “mixed” air rises toward the centered ceiling or higher “cathedral ceiling” area creating natural convection and diffusion. Depending upon the individual structure attributes and aggressiveness of the radiation delivery there is always a level of lamination at the center/peak that can be advantaged by forcing it downward to mix and accelerate the heating process. The following pictorial is offered: 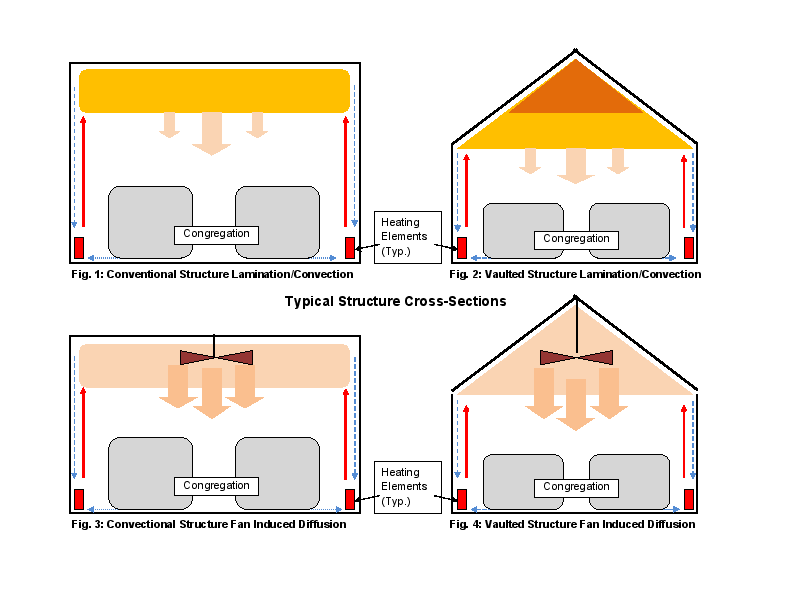 Figures 1 & 2 above depict natural temperature lamination and convective flow of a perimeter-heated structure.

Heating elements are purposefully placed against lower exterior walls to induce thermal convection while diffusing (mixing) with cooler air off the exterior walls for greater comfort. However, lighter heated air rises and accumulates at the ceiling levels, stratifying the air mass above. Cooling uppermost air gradually sinks and diffuses with lower, forming a midway convective path as depicted. Natural convection is never complete and the structure’s air mass is always significantly graduated temperature-wise from bottom to top.  The “vaulted” or “cathedral” ceiling in Figure 2 accentuates this condition, as coloring depicts. We must use forced convection (blowers or fans) to advantage ourselves.

Our contention can be readily proven by switching on your present summer cooling fan(s), rotating to force air downward and adjusting until a modest air movement is felt. Turn on your heating thermostat and you will note a significantly quicker time-to-temperature resultant. The initially laminated air mass is diffused and then mixes with newly heated air to approach a more uniformly heated air mass. Ideally you should leave the fans on during the occupancy period, irregardless of thermostat demand cycling. It should be obvious that if circulation as described is not attainable, fan resizing and positioning may be necessary.

Fan operation should be integrated into the heating system to maximize utilization and efficiency. The techniques must differ to suit each basic system type.

1. Boiler-based Forced Hot Water (Hydronic) or Steam Systems are relatively simple to integrate. Trace the supply line from the top of the boiler outlet to the radiators or baseboard in the fan-located heating area.

a. Place a heat-sensing “strap on”, “close on rise” aquastat such as the appropriate Honeywell 4006, 6006 Series on this supply line. Re-wire the power feed to the fans through the aquastat.

b. Set the aquastat at 120°F as a starting point. Adjust in operation to suit. The lower the set point the longer pre-heat and post-heat fan operation to initially diffuse and then maintain comfort levels during cycling.

Note that an alternative control method is using a kick-space heater thermostat to switch a power relay such as a Honeywell RA89A (or other). Unfortunately the kick-space thermostats are typically available only in 110ºF (Low Option) 0r 130°F (Standard). However they can also be directly wired into an HVAC System, depending upon type. Commercial variants are available in different temperature settings as may be required.

Using the prior technique another expedient is available. Purchase a common 24/7 Day Cycle Timer to dry switch the Honeywell RA89A Power Relay directly via its T-T (Thermostat) Terminals. Program the timer to approximate the 24/7 occupancy periods. Not as efficient, since intermediate heating cycles are not accommodated, but comfortable for the congregation.

Air lamination is an atmospheric attribute that must be addressed in all heating and cooling applications. Our scenarios apply not only to churches but assembly halls, public buildings and selective residential applications. In the end it’s cooperating with Mother Nature rather than fighting her.